What happens when an ordinary British guy gets hit by a meteor and turns into a superhero?

Obviously he becomes a civil servant for the MOD. 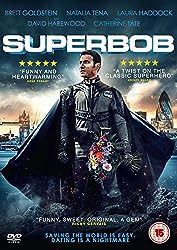 Superbob is “a day in the life” story of Robert Kenner, a former postman who is also the world’s only SuperHero.

Staring  Brett Goldstein and Catherine Tate this is a British superhero film. Not so much an action adventure as a romantic comedy.

Before being hit by a meteorite, Robert was working as a postman. Since becoming Superbob he has saved the world but missed out on love. Now he is an overworked, underappreciated civil servant, employed by the British Government, who spends his waking hours saving people and filling out forms.

The film follows him on a rare day off. If he can actually get his boss to allow him some free time, he is going on his first date for 6 years.

Shot in south London on his day off this mockumentary format follows Bob as he prepares for his date, being hampered by spectacular disasters happening all around him in the build-up to World War Three.

And What if Britain really did have a Superhero?

Brett Goldstein was a little cagey when he told Bruce Dessau of the Evening Standard that,  amazingly, the MoD has a genuine plan already in place and that a real superhero would be put to use as a loan to other countries to secure international co-operation.