The next game is:-

With an escape room in a box, instead of being locked in a room, you solve puzzles to complete a mission while sitting around your table.

Each game can only be played once as some of the pieces are used (destroyed) during play, unlike the Deckscape card game. True, once you’ve played the game, you should know how to solve the puzzles so why would you play the same game again. But people do play a murder mystery boxed game more than once as, although they know who-dun-it, the game play is different with a different group of friends.

The box contains a notebook and a deck of cards containing clues, with a code wheel to help you solve the puzzles. The game is aimed at 1 to 4 players, so four of us gathered to play. The abandoned cabin is given a difficulty rating of 2.5 out of 5.

It took a while to work out how to start the game. But once we did start we quickly got the hang of combining the symbols.

Each puzzle is marked with a symbol, and you align a three-digit or three-colour code on the code-wheel to check you have the right answer. As well as riddle cards and answer cards, there are help cards available to keep you moving forward.

Some of the puzzles required looking at the cards, but some required studying the book. The tiny printing on the single booklet sometimes made it difficult to read. You could always photocopy additional copies (probably frowned upon) so all the team can study  the clues. And remember, you can only play the game once, as the box warns that some game materials must be cut up, marked or folded.

We spent a fun afternoon solving the riddles of the deranged cabin owner and escaping the abandoned cabin. 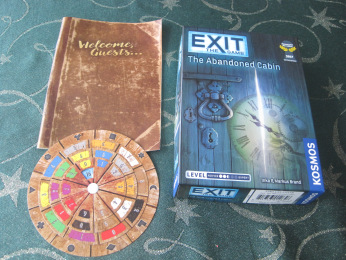 The plot of EXIT: The Abandoned Cabin

After your car breaks down, you are looking for shelter for the night.

Luckily, you find an abandoned cabin in the woods near the road. But the next morning, the door is locked! Iron bars on the windows prevent you from escaping. You discover a book and a strange disk…

Can you solve the riddles left for you by the deranged cabin owner and escape the cabin?