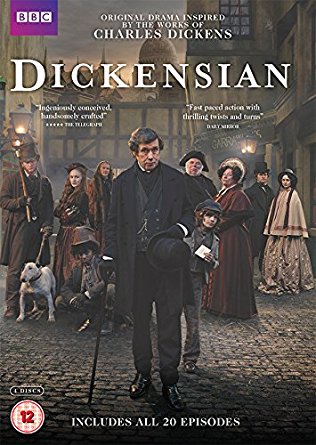 Marley was dead: to begin with. There is no doubt whatever about that. The question was – how did he die and who killed him?

This drama begins as a murder mystery in Victorian London. It offers a glimpse into the backstories to the characters described in Charles Dickens works.  Dickens created around 989 named characters and many of them are featured in Dickensian.

Inspector Bucket sets out to investigate the murder of Jacob Marley. Along the way he  suspects such well known characters as Bill Sikes and Fagin, and even nice Mr Cratchit.

Meanwhile, Amelia Havisham inherits her father’s estate, to the chargrin of her brother.  Love may be (or may not be) in the air for Amelia and her friend, Honoria. This drama plays out more like a soap opera than a murder mystery.

Does Inspector Bucket solve the crime? Yes, he does. But even when the murderer is revealed the drama continues. The plot lines for the other characters, notably that of  Miss Havisham, continue to play out.

So who was the murderer? Now, that would be telling. To find out you’ll need to watch  the series. The 20 episodes boxed set of the BBC drama Dickensian is available now.