The history of Piccadilly

The urban development of the area dates back to the 15th century. Giving most of his land to the King for a Royal Park, Anthony Cotton retained a parcel of land to bequeath to his heirs. In 1618-19 John Cotton  sold it to John Golightly, who later sold it to the tailor Robert Baker.

The name Piccadilly comes from the word piccadill. This was a wide, decorated collar invented by Robert Baker. The impressive house Robert Baker had built in the area became dubbed Piccadilly House.

An afternoon of adventure around Piccadilly.

There is a lot of heritage to be found around the Piccadilly area. If you would like to explore the area and discover some of the plaques and  statues etc, why not come on a Treasure Hunts in London Adventure?

The fun begins in the Annenberg Courtyard of the Royal Academy.

Treasure Hunts in London staff will issue clue packs to teams of 2 to 4 people and brief you on the hunt. The cryptic clues are aimed at an adult audience and require you to “hunt” for the “treasure” (ie the heritage) before answering questions about it.

All Treasure Hunts in London adventures are themed and this one is The Naughty or Nice Treasure Hunt. The hunt is followed by a naughty but nice Peyton & Byrne Cream tea in the Keeper’s House at the Royal Academy.

Nestled in the corner of the RA’s Annenberg Courtyard is the Keeper’s House. It was created over 140 years ago as the grace and favour residence for the Academy’s Keeper. Award winning architects Long & Kentish have restored the Keeper’s House retaining many details from vaults to old ceiling beams and hearths originating from the 1660s.

The next treasure hunt and cream tea available to the public will be on Saturday 18th June 2016 at 2pm . Tickets must be booked in advance.

The treasure hunt and cream tea package is also available to hire for private parties. 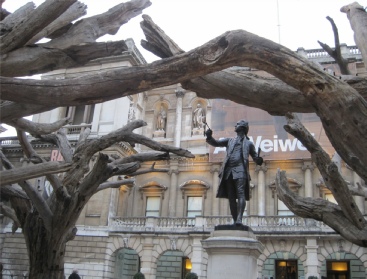